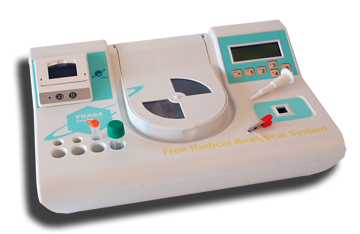 FRAS 5 is the most advanced system for measuring oxidative stress. FRAS 5 uses plasma or serum instead of whole blood, and therefore, it is not influenced by the hematocrit that causes altered and thus inaccurate values.

You need only one blood withdrawal to perform the two tests d-ROMs fast and PAT.
Reading times are the shortes: two and half minutes for d-ROMs fast test and 1 minute for PAT test.

PAT is the most recent evolution in the test for the evaluation of antioxidants:
it is the only test that eliminates the interferences of phosphates and therefore it is both the most specific and the fastest.

The SAT test allows the evaluation of the antioxidant activity of saliva helping the prevention of problems and diseases in the oral cavity.

Thanks to these real-time tests, it is possible to establish an accurate and reliable diagnosis of oxidative stress. By these assessment only, you can optimize specificantioxidant therapies and monitor their effectiveness.

The software can be updated and new tests can be added by means of a USB connection with a PC.

A delicate balance exists in our body between the production and the "swallowing" of free radicals and other reactive oxygen species (ROS).

Free radicals are either single or grouped atoms having at least an unpaires electron in one of the outer orbitals of the chemical species of which are built.

These agents play an essential role in living systems, both by contributing to the defence against the assault from pathogenes and by intervening into the modulation of important biological processes (e.g. genic expression, transduction of biochemical signals, etc). They are potentially harmful nevertheless, since they try to acquire the missing electron in order to reach their own stability and in this way they may virtually react with any molecule they reach and oxidize it.

The living organisms have developed during the past thousands of years a complex defence system, made of antioxidants, in order to prevent or to lessen the potential damaging action of free radicals. The antioxidants include an extremely heterogeneous series of agents, made of enzymes (e.g. superoxide dismutase, catalases, peroxidases), vitamins (e.g. ascorbate, tocopherol, carotenoids), vitamin-like substance normally available in nature (e.g. bioflavonoids) and trace elements (e.g. selenium), all with the capacity to hinder the "oxidant" action of free radicals by means of several mechanisms.

When the physiological equilibrium between production and elimination of free radicals changes in favour of the reactive species, these ones provoke a series of cellular lesions that, if not properly circumscribed, may evolve into systemic or organic damages, bringing up in this way the picture of "oxidative stress".

Oxidative stress is a sort of "chimical stress" induced by the presence in our body of abnormal quantities of ROS and, in particular, of free radicals. This condition may be the consequence of an increased production of ROS and/or of a decreased efficiency of the antioxidant defence systems, usually appointed to theyr elimination.

The causes responsibles for the increase of free radicals may be located outside or inside the organism. Among the external causes there are some physical agents (e.g. UV and ionizing radiations), several chemical substances (e.g. hydrocarbons, herbicidals, contaminated food, drugs) and some infectious agents (e.g. virus and bacteria). Among the internal causes there are the exaggerate acceleration of cell metabolism (e.g. after strenuous exercise without proper training) and several diseases (e.g. obesity, diabetes, etc).

The causes responsible for the decreased efficiency of the antioxidant defence systems may be found among a decreased intake and/or absorbtion and/or availability and/or increased consumption of such important protective components.

Whatever the cause, oxidative stress is believed to be responsible of early ageing and of a very long serie of common deseases - about one hundred - that span from arterial hypertension to atherosclerosis, from infarct to ictus, from Parkinson’s to Alzheimer’s, from colitis to pancreatitis, from obesity to diabetes, from chronic bronchitis to rheumatoid arthritis, from AIDS to several types of cancer.

But even if these conditions are almost always recognizable from a correct medical test and from a series of well known inquiries, the oxidative stress is much more devious, since it has neither typical symptoms nor particular clinical pictures, because its causes come from "invisible" sources, sucs as free radicals.

For this reasons, oxidative stress does not give any clue to further investigate to the doctor that does not imagine its existance, whereas the performance of simple biochemical tests allow to understand immediately the problem and to avoid a series of consequences that would compromise the duration and/or the quality of life of the patient, both on medium and on short range.

In such a background arises the highly innovative technology of the FRAS 4 Evolvo system, that covers the gap still existing between research and clinical routine.

FRAS 5 Evolvo - Free Radical Analytical System - is a new integrated analytical system consisting of a dedicated photometer with an incorporated centrifuge, designed to allow the global assessment of oxidative stress, by means of two tests, i. e. d-ROMs test and BAP test, on a small sample of capillary blood, through finger-pick on a finger-tip.

The d-ROMs test allows to determine the blood concentration of reactive oxygen metabolites (ROMs) and, particularly, that of hydroperoxides, which are markers and amplifiers of free radicals induced oxidative damage. In such a test the ROMs concentration is proportional to the intensity of the red coloration - photometrically evaluated - developed in a tampon system with acid pH, following the addition of the properly centrifugated blood sample and of a solution containing an aromatic alkilammine (chromogen). The test is evaluated in a conventional measuring unit called U CARR (from the chemist Carratelli, the inventor of the test). Normal values are from 250 to 300 U CARR; above 300 U CARR there is the oxidative stress, but for a thin borderline range (301-320 U CARR).

The BAP test (biological antioxidant potential) allows to determine the efficiency of the plasma antioxidant barrier - the set of proteins, vitamins and other substances able to hinder the reactivity of free radicals and ROS - asiron-reducing activity. In such a test the extent of the decoloration of a previously coloured solution - containing an iron salt and a thiocyanate derivative - is directly proportional to the biological antioxidant potential. The optimal value of the test is 2200 µmoli/L. Lower values point out a reduced efficiency of the plasma antioxidant barrier.

By means of these tests, it is now possible to formulate a more precise and reliable laboratory diagnosis of oxidative stress, where the two distinct and opposite components, either pro- or anti-oxidant can be assessed in a distinguished manner. In other words, it is now possible to establish in "real time" whether oxidative stress depends on an increased production of free radicals and/or a decreased efficacy of inactivating them. Therefore, antioxidant therapy monitoring also can now lean on more solid bases, thus going out its actual "empirical phase".

For all these reasons, FRAS 4 Evolvo is a highly innovative system capable to give real time info on the global oxidative balance of any person.

Everyone should undergo the oxidative stress assessment, even if they are healthy, and even more if one is continuously exposed to pro-oxidant factors (i. e. incorrect life-style, pollutants in work environment, etc.) or it is suffering from chronic degenerative diseases (i. e. diabetes, atherosclerosis, dementia, Parkinson’s disease, Chron’s disease, Down’s disease, rheumatoid arthritis, cancers, etc.) or, finally, if one undergoes some treatments (i.e. dialysis, by-pass, grafting, pill, radiotherapy, chemotherapy, etc.).

Only by means of this global assessment it will be possible to optimize specific therapies and to monitor the real effectiveness of antioxidant formulas, where often their intake is not accompanied by a preliminary test able to demonstrate its necessity.