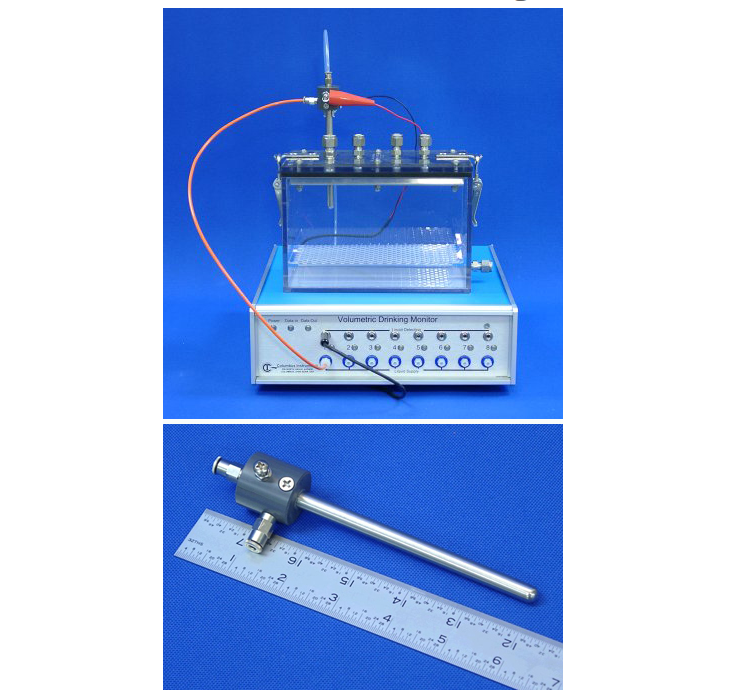 Columbus Instruments' new Precision Drinking Monitor measures liquid consumption of mice and other small animals with 20 microliters resolution. Liquid is delivered to the licking dispensers in measured 20 microliter drops by the special pump. The liquid reservoir can be placed above or below the animal cage and can be common for multiple animals. When the animal removes one drop, the next is being delivered to the dispenser by the pump. Multiple dispensers can be placed in single or different cages. The standard number of liquid dispensers is 8, but the system is capable of monitoring consumption for a few hundred animals at a time. There is no possibility of leaks, which plague other dispensers.

The Columbus Instruments Precision Drinking Monitor is far superior over other common "lick counters" on the market. Information is presented volumetrically in microliters of liquid consumed rather than simply a number of licks on the sipper tube with varying amount of liquid consumed. Nevertheless, the Precision Drinking Monitor can be equipped with circuitry, which will count licks, if such an arrangement is valuable to the researcher. Windows software allows integrating the Precision Drinking Monitor with other parameters such as Oxygen Consumption, Food Consumption, Animal Activity, Urine Collection, etc., making this a unique and valuable instrument in lab animal mutagenesis