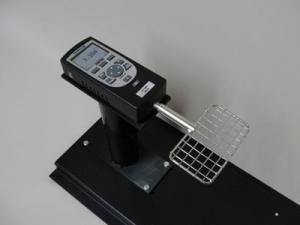 Columbus Instruments' line of Grip Strength Meters are employed in assessing neuromuscular function by sensing the peak amount of force an animal applies in grasping specially designed pull bar assemblies. Metering is performed with precision force gauges in such a manner as to retain the peak force applied on a digital display. The values may be either recorded manually or automatically with the included software. Fore and hind limb assessments can be performed concurrently with the dual sensor models or they can be performed in separate trials with the single stand model. Readings may be obtained in pounds, kilograms, or newtons. All values are accurate to within +/- 0.25% of full scale capacity. Force gauges are offered in 0-1Kg and 0-5Kg ranges. Pull bar assemblies are manufactured to suit the species of animal under test. Standard pull bar assemblies are offered for rats and mice.

In practice, the dual sensor model is employed by first allowing the animal to grasp the forelimb pull bar assembly. The animal is then drawn along a straight line leading away from the sensor. The animal will release at some point and the maximum force attained will be stored on the display. In dual sensor models, the animal continues to be moved along until the rear limbs grasp the second pull bar assembly. Again, there will be some point at which the animal releases after which the second sensor will retain the hind limb grip strength. The test for this subject is now complete. The values may be either manually recorded or sent to an attached computer via USB.

The single sensor model is designed to perform all fore limb measurements first after which the pull bar assembly is replaced with the rear limb assembly and rear limb testing resumes.