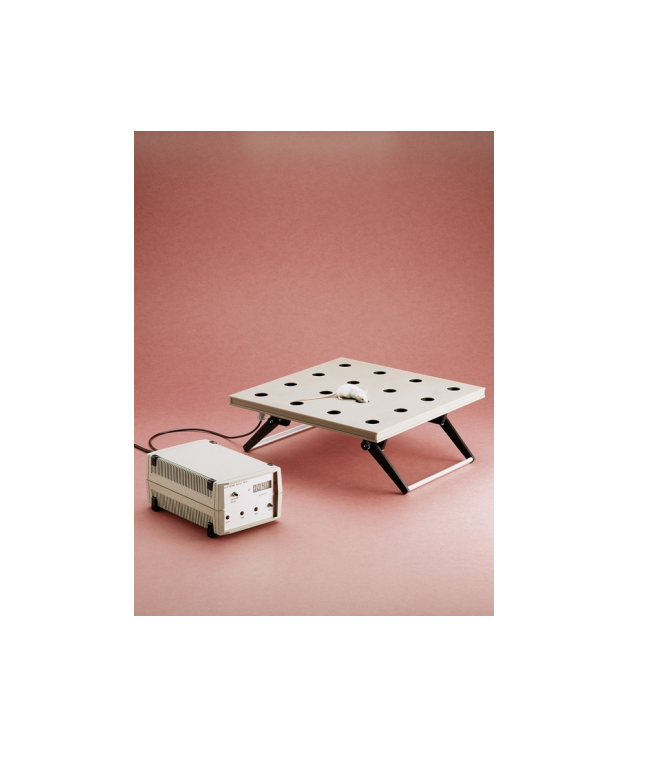 The Hole-Board 6650 was conceived to study the behavior of the mouse confronted with a new environment (head-plunging, or nose-poking stereotype) according to the method devised by Boissier-Simon.

The test enables the initial exploratory activity of the animal and its variations brought about by psychotropic drugs to be unmistakably assessed. The recording of the “head plunging” stereotype takes place automatically, via miniature I.R. emitters/receivers embodied in the the board holes.

The Board, made of grey Perspex panels, is dimensioned 40x40 cm, 2.2 cm thick. The board is supported by two adjustable brackets, hinged to the bottom panel, so that the “walking platform” can be positioned from 7 to 18 cm over the table level. The test can be easily performed; it lasts few minutes and does not require any previous training of the animal.

Data can be routed to the PC via the optional Multifunction Printer: in alternative, the standard 6650 can be connected to a PC parallel port via an optional cable, to acquire the number of pokes via ANY-maze and combine them with data collected by the videotracking software.

A special model of Mouse Hole-Board is also available, with no electronics, ideal for Videotracking. The 46653 is a simple open field, dimensioned 40x40cm, with 16 holes diam 3cm, spaced 10cm apart (from center to center), enclosed in transparent (or opaque) walls. A similar model, the 46652, is also available, dimensioned 1mx1m, 35cm high, 16 holes diameter 3.8cm, to test rat exploratory behavior.

The exploratory behavior of laboratory rodents is of interest in a number of areas of behavioral pharmacology. The normal mouse of either gender, when confronted with a new environment, will explore holes in the substrate of its environment by poking its nose in and out of the hole a few times, then moving on to the next hole.

Many unconditioned tests, such as the open field, potentially confound general locomotor activity with exploration. The hole-board apparatus appears to avoid this inconvenience, as head-dipping into holes in the floor represents a valid measure of the subject's attraction towards novelty.

The initial exploration activity of the animal and its variations brought about by psychotropic drugs are unmistakably assessed. The nose poke frequency provides an indicator of exploratory behavior.