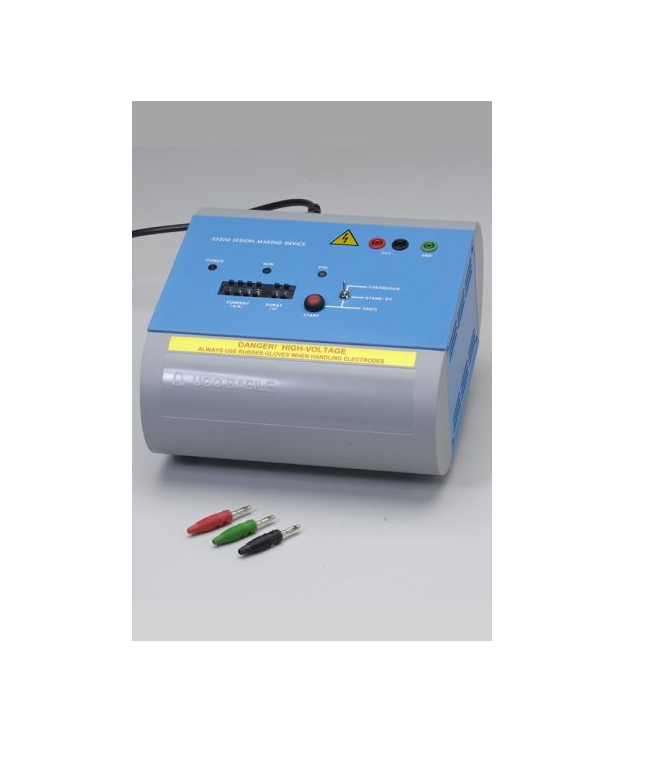 The Ugo Basile Lesion Maker has been designed for the production of localized electrolytic lesions in small animals where DC is preferred to RF, to produce the lesion.

It features a regulated power supply combined with a constant DC current generator which operates on either continuous or timed mode.

The current generator is protected against short circuit, which prevents the electronics to get damaged due to the electrodes coming accidentally in contact with each other.

Particular emphasis has been placed in the design of a good circuit output/ground insulation.

This feature, besides enhancing safe operation, minimizes spurious current field lines across the tissue, outside the pattern the operator has preset.

The surgically or electrically induced lesion has served as an important tool in the exper-imental search for function in the CNS. Its value has derived in part from the simplicity with which it can be used to study neural mechanisms of behaviour at a basic level.

The advent of the stereotaxic technique, moreover, allowed researchers to produce dis-cretely placed lesions with consistency, especially in sub-cortical structures of the brain.

The strength of the lesion technique resides also in the variety of ways with which to ap-ply it. Manipulating the type of lesion (DC, RF, knife cut, etc.), its size, the type of elec-trode, the angle of entry, and so on, should continue to expose critically important as-pects of neural functions because of the different effects that are produced.

It is no coincidence that the history of the development of these techniques is closely tied to the recent history of theories regarding localization of function in the brain. The tradi-tional view, whose basic tenets are that (1) the functions are represented in discrete brain structures and that (2) the lesions disrupt function by removal of functional tissue in circumscribed sites, have been recently challenged by growing evidence of the importance of secondary changes.

These are induced by a lesion, both directly (necrosis, anterograde and retrograde de-generation) and indirectly (transneuronal degeneration, regeneration and sprouting, al-teration of neurochemical pools, vascular disruption) and may comprise the more signifi-cal neurological changes which can account for alteration of behaviour in a lesion exper-iment.

New strategy of research utilizing lesions is proposed, suggesting that greater emphasis be placed on the a posteriori assessment of secondary changes in the brain as they are correlated with changes in behaviour.